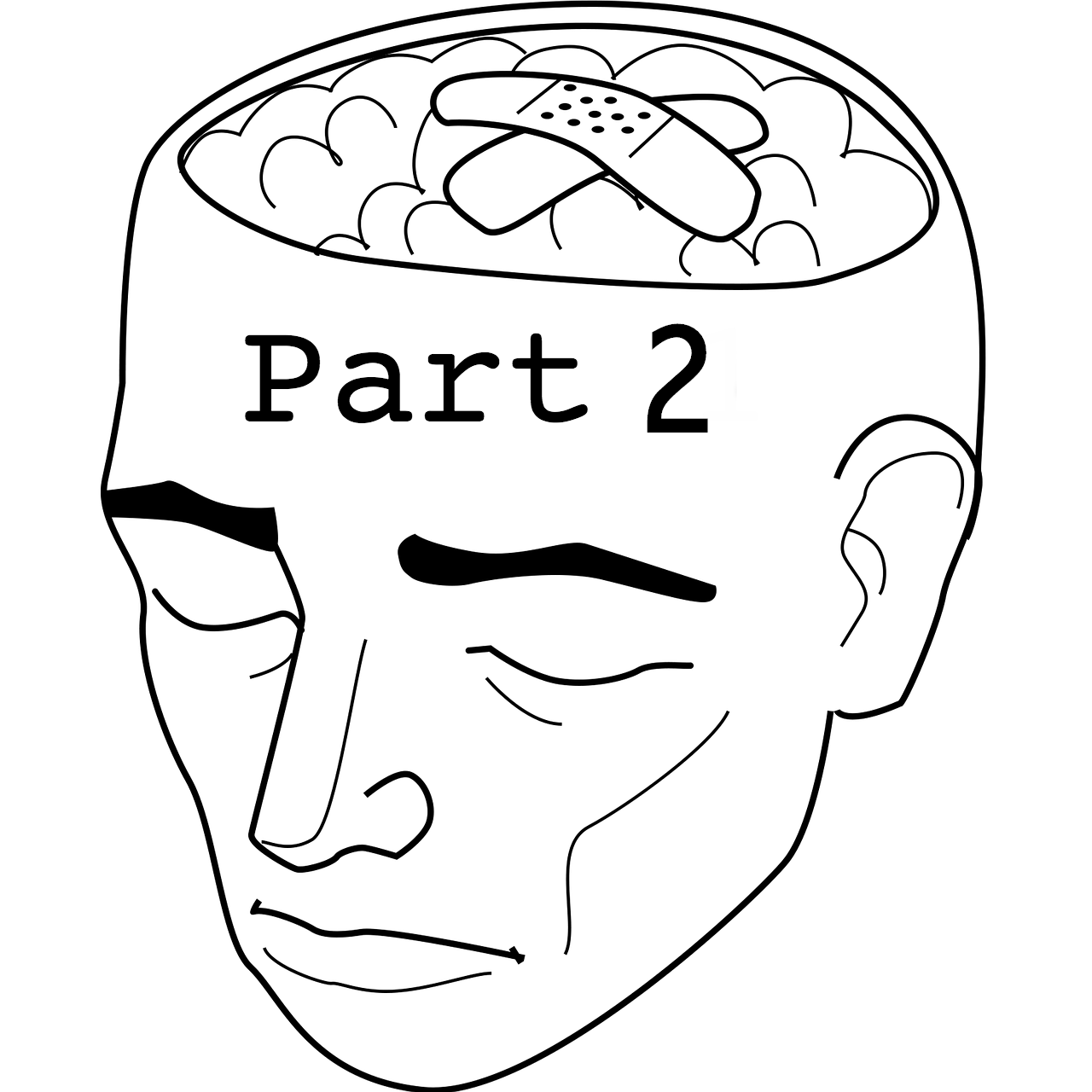 Disclaimer: This piece is satirical. On purpose. Please do not interpret all words literally.

Hey Folks!  Welcome back!  If anyone is concerned after reading Yikes, Part I because I divulged juicy details about my experiences….

Don’t worry. I am healthy, and safe. Think of this as just another ordinary day on our gorgeous spinning ball of dirt called Earth.

I am not having thoughts about hurting myself. I am not planning on doing anything impulsive, except for maybe buying a bag of Skittles and driving to the park to smell some nature.

But the truth is that my anxiety did get bad, bad enough that I struggled with simply going to work. Not because of the work itself; I actually love being an ER doctor, and think I have the best job in the world.  That I could love my field of training and still struggle to go to work tells you everything you need to know about these difficult symptoms.

Ironically, my struggles led me to an urgent care.  I found myself at a completely random but meticulously selected facility on a beautiful Sunday morning on my one day off from work. The building had these windows which suggested the outline of a lighthouse. It was so (tongue-in-cheek) precious I could barely resist walking in the door.

Truth be told, I went there because I started having panic attacks as a result of untreated anxiety.  And even though I was pretty clear that’s what was happening to me (I did go to medical school after all you guys), I was SO MORTIFIED at the thought of going to see my own doctor that I went to an anonymous urgent care instead.

Casual as though it would seem I’m casually worried about this occasional sensation of imminent physical death. Casually cool, like that guy across the waiting room here with his itchy eyeball.

You remember from Yikes, Part I that I told you before not to be ashamed about struggling with mental health. But shame plays a large part when dealing with these issues.  I feel ashamed too sometimes. And it’s okay. Anxiety, depression, and the whole gamut of mental illness is not super different from other kinds of health issues. READ: weird body stuff. Yeah, you know what I’m referring to. It happens. Really. I’m an ER doctor. I’m sure I’ve seen worse.

Public Service Announcement: Unfortunately, not all health problems can be fixed by medicines alone, even though they may help. Malaria may be one exception to this rule 1.

For me, the anxiety became bad enough that I decided to call out sick,.  And that made me feel guilty for even having that thought. I drafted an email to my boss, completely convinced I was going crazy. Like I was clinically insane and somehow hadn’t realized it for all these 30 years.  I envisioned the Crazy-Person Police finding me and dragging me to the nearest hospital, which would lead my supervisors to revoke my ‘being-a-doctor’ privileges.

As you can tell, anxiety is a powerful thing. It can warp your reality so subtly that sometimes that you don’t even notice, until it gets really bad.

Objectively, I knew these worries were false. As a doctor, I knew that “fear of going crazy” was literally in the textbook definition2 of several anxiety disorders.

I told myself this.  Repeatedly. It felt almost like a mantra, or the world’s most annoying pop song. But I didn’t fully believe it. Nonetheless, I called out sick, and my colleagues were (not surprisingly) completely normal and nice about it.

Then I did all the things that doctors tell you to do when you’re sick:

That advice helped, but it took time.

I remember feeling paranoid that strangers in the grocery store could tell I was HAVING A MENTAL BREAKDOWN, as though confetti was about to pop out of the ceiling and someone would hand me a check with “Congrats, you’re screwed!” written on it.  Funny, I thought, at least then if I were crying in the middle of the grocery store, it would seem contextually appropriate.

I realize now that my poor, slimy-squiggly brain was ruminating on this particular phobia because maybe it was unconsciously hoping that someone ¾not anyone I actually KNOW (dear God, how embarrassing) would realize something was wrong, come up to me and say:

And then I could say:

“Oh I’m fine thanks, just feeling a little out of it. Maybe I’m coming down with something. I should drink more water!”

And (the fantasy continues) I would laugh and laugh as if it were a hilarious joke. Like drinking more water is a fun hobby that I sometimes enjoy, rather than something I require to survive.

Sidebar #194: You may find this tale amusing or maybe if I’m lucky you’re even chuckling quietly under your breath while you read it sitting in a bathroom stall at work. Guess what? That’s normal too!

Actually, Humor is a great way of coping with stress. Most ED docs know this, it can be the ‘gallows humor’ that gets you through a tough day.  But please, be careful, because humor can get sneaky and suddenly it becomes a tool to avoid speaking about the feelings you’re experiencing.  It can falsely convey that those struggling with anxiety SEEM like a normal well-adjusted people who never feel any negative emotions.

That is what psychiatrists may call “an unhealthy coping strategy” (and I may call “a one-way ticket to the terrifying Thunder Dome that is truly out-of-control anxiety and depression!”).

So anyway, when my anxiety got bad enough, instead of saying right away “I do not like this at all, please get me OFF THE RIDE!! HELP!”, I said nothing.

The only act I felt physically capable of mustering was to call out sick and tell my colleagues that I was tired or “off my game”.  You know, because sports metaphors always seem like a good way of pretending you are a functional human being.

Of course, those words didn’t actually capture my experience accurately. But at the time, I was hesitant because honesty might make people think I was crazy.  Or it might garner me an immediate hug (when I was around), with non-stop whispers of concern (when I wasn’t).

Sometimes though, taking care of yourself isn’t about socializing or doing something that feels worthy of posting on Instagram. Sometimes taking care of your self means reading a book.  Or spending time outdoors.  Or playing video games for 4 straight hours while not realizing that it’s 2am, or that you somehow have only one sock on.

It turns out, what I had been afraid of calling (capital-A) anxiety was actually just my poor, sad, resilient, impossible-to-comprehend, slimy-squiggly brain saying YEAH OKAY THAT’S ENOUGH. You wanna be worried? I’ll show you worry!

To be clear, I did not magically “pull myself up by the bootstraps.”

I personally am not sure such a thing is possible.

Honestly, it was thanks to the people in my life who I’m lucky enough to call my safety net. Not just moms and sisters, or best friends and partners, but also work friends and bosses.

It wasn’t until I talked to some of those people who I trust (including my own doctors), without any fear of judgement or reprisal that I started to heal.  To be clear, I don’t think this was bravery.  It was honestly just absolute physical and mental exhaustion at that point that inspired me to act.

It wasn’t until I really felt my worst that I was able to tell myself that what was happening made sense. Yes, it sucked, for sure. It was the paradoxical opposite of fun and puppies and vacation on the beach.

But it was normal. It was okay. And I was going to be okay too. It wasn’t until I started to normalize these feelings that I actually started believing it again that it was okay.  And that I was okay.

One final disclaimer: I am a doctor, but not a trained psychiatrist or licensed therapist. If you are struggling with mental health, there are experts who can help. You can ask your doctor, or an ER doctor, or an urgent care doctor for a referral.

1. I put this footnote after malaria so maybe you’d be tricked into actually reading it. But surprise! It’s where I’m putting some resources for mental health. Just in case you need or want them. And it’s completely okay if you do.

If you struggle with anxiety, a great local resource is the Center for Anxiety and Related Disorders at Boston University: https://www.bu.edu/card/get-help/

A free national hotline for anyone whose anxiety, depression, or another mental health issue has reached a point of crisis is 1-800-273-TALK (8255)

We are so excited to host our second recruitment session “First-Gen in Higher Education and Medicine” on Wednesday, August 10th! Please join us to hear from residents as they talk about their journeys being the first doctors in their families, and how that experience has looked at BMC.
Just two birthday girls and fierce mamas-to-be hanging out at conference today! 🥳🎉
EM-bound MS4's, please join us (virtually) on July 27th at 7:00pm for our Life in Boston and BMC Residency panel! 🎉 Come chat with some of our residents about why we LOVE BMC and Boston. Learn how we live, and enjoy ourselves in and out of the hospital, in one of the most expensive cities in the US.
‼️ Presenting you with the most helpful cricothyrotomy instructional video you’ve ever seen ‼️