Palpitations in the ED: Treatment Strategies for Rapid Atrial Fibrillation. 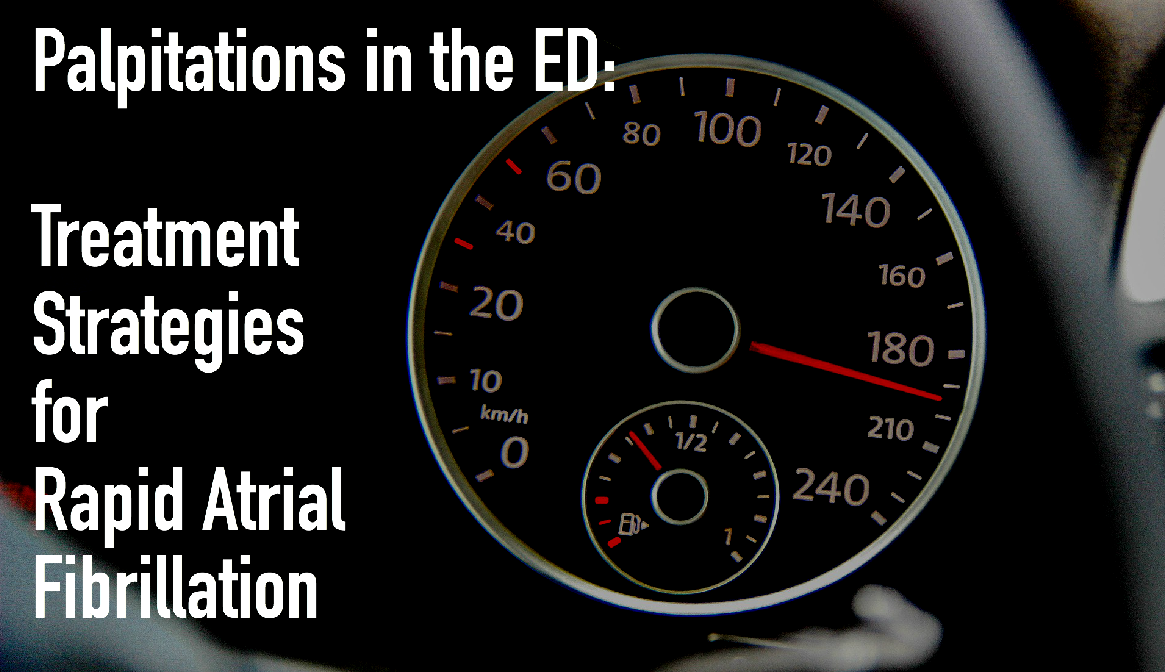 Atrial Fibrillation (AF) is a supraventricular tachyarrhythmia caused by uncontrolled atrial activation, usually associated with rapid and irregular ventricular response.1 AF has a prevalence of about 3% in adults over age 20,2 an overall lifetime risk greater than 20% in those above 40 years of age, and an even higher incidence in ED patients, who might be septic or otherwise critically ill.3 The lack of uniform atrial depolarization and contraction results in decreased ventricular filling and cardiac output. In atrial fibrillation  ( absent accessory pathways), the ventricular rate is limited by conduction through the AV node. When untreated, the ventricular rate is typically between 120 and 170 beats per minute.4

Although much of what follows is applicable to new onset AF, it is meant more specifically as a thought process for patients with a known history of atrial fibrillation.

Common teaching for the acute management of AF with rapid ventricular response (RVR) focuses on rate control through the use of negatively chronotropic drugs followed by cardioversion (chemical or electrical). Electrophysiological or surgical ablation of the atrioventricular (AV) node can also be employed (concurrent with pacemaker insertion).

Pharmacologic therapy options are usually: (1) beta-blockers, (2) non-dihydropyridine calcium channel blockers (CCBs), (3) amiodarone, or (4) digoxin. For unstable patients or RVR refractory to pharmacologic interventions, electric cardioversion is usually employed. In the chronic treatment of AF, rate control strategies with beta-blockers and CCBs are often used, given lower cost, simpler dosing regimens, and fewer risks – especially in older patients. Some providers elect to use a rhythm control strategy in younger patients with the goals of better symptom control and the theoretical, but unproven, benefit of remaining in sinus rhythm for longer periods of time.5

Acutely, data supports the use of rate controlling medications given the greater efficacy in treating AF with RVR.

In practice, many providers will prioritize decreasing rapid heart rate when treating a patient with a known history of AF presenting in  RVR. This holds true even in stable patients with minimal or no symptoms. While treating the heart rate is an important acute goal, identifying the cause of RVR can focus interventions and avoid potential harm such as iatrogenic induction of decompensated heart failure.

Structural or conduction abnormalities of the heart, metabolic derangements, and certain medications can all cause new onset AF, which is expected to be tachycardic. In addition, other conditions that impact cardiac function such as  sepsis, pulmonary embolism, myocardial infarction , pericarditis, and rheumatic or other valvular heart disease should be considered. Finally, hyperadrenergic states such as sympathomimetic drug intoxication, hyperthyroidism, recent alcohol abuse, active alcohol withdrawal, or recent surgery should be considered.6 Conversely, patients with known atrial fibrillation who present with RVR may have novel stressors from the aforementioned etiologies, inadequate rate or rhythm control, or any of the causes normally associated with sinus tachycardia.That is to say, AF with RVR is the sinus tach of hearts with known AF. As such – infection, pain, anxiety, hypoxia, bleeding, dehydration, and heart failure should all be additionally considered. Treatment of rapid heart rate must be balanced with treating the underlying cause.

Before initiating any medical therapy, consider and reconsider whether the patient has an accessory-pathway mediated tachycardia such as Wolf-Parkinson-White Syndrome (WPW)! An irregular, tachycardic, and bizarre appearing EKG may in fact be AF with WPW. In this situation, any agent that impedes the AV node risks worsening the patient’s condition by funneling all impulses through the accessory pathway – causing the unstable tachycardia to precipitously worsen. Do NOT give these patients beta-blockers, CCBs, or amiodarone. Instead, procainamide or electric cardioversion should be considered.

As previously mentioned, acute management of AF with RVR focuses on 4 drug classes and synchronized cardioversion.

Calcium-Channel Blockers have the best evidence for use to rate control patients with rapid AF.7

Most providers prefer the use of diltiazem for acute rate control. Of note, CCBs should be avoided in patients with a reduced LVEF.

Beta-blockers are also considered first-line agents for treatment of AF with RVR, particularly for AF associated with thyrotoxicosis. They are usually preferred if patients have known AF and take beta-blockers for chronic rate control. Beta-blockers are recommended in patients with heart failure, but the smallest doses should be used and must be avoided in patients with decompensated heart failure. Esmolol, because of its short half-life, is a good option for patients where there is concern that therapy may be poorly tolerated. An important caveat is to consider when AF may be due to hyperadrenergic stimulation (with theoretical unopposed alpha-stimulation). The argument is based on little evidence and though the dogma is likely overblown, consider, with caution, beta blocker administration in such circumstances, being both prepared to manage this theoretical complication with an alpha blocker (i.e. phentolamine) or vasodilator (nitroglycerine or nitroprusside).

Amiodarone, given as a loading dose followed by an infusion, is a second-line agent for rate control. It can be considered for patients with decompensated heart failure. Amiodarone may convert atrial fibrillation to normal sinus rhythm and should only be given if the heart has been in AF for less than 48 hours, transesophageal echocardiogram confirms absence of thrombus in left atrium/left atrial appendage, or the patient has been anticoagulated for ≥ 3 weeks. Some important potential side effects to consider include hypotension, heart block, warfarin interaction, and sinus bradycardia. If a rhythm control strategy is chosen, procainamide may be a better option than amiodarone. Amiodarone showed no difference to placebo at cardioversion within 1 or 2 hours of administration,8 whereas procainamide had a median time to conversion of 55 minutes.9

Digoxin is not considered a first-line agent for treatment of rapid AF. Reasons include slow onset (up to 1 hour) and delayed maximal effect (up to 6 hours). That said, it should be considered for rate control in patients with evidence of decompensated heart failure, and may offer additional benefit because of its ionotropic effects.

In patients presenting with hemodynamically stable rapid AF, electric cardioversion should is the first-line intervention.An attempt at full dose cardioversion (200J on a biphasic machine) with pads placed anterior and posterior is warranted. It is reasonable to shock 2 or 3 times if the first shock in not successful; anecdotal evidence suggests, however,  that if the first shock is not successful, the subsequent ones are not likely to success What happens  if electric cardioversion is unsuccessful, leaving the patient with persistent hemodynamic instability? There is little data to guide treatment strategy at this juncture.

In the above critical setting, priorities are to aggressively pursue rate control while supporting blood pressure. Aggressive rate control with diltiazem, has the best evidence for achieving control. Set the infusion at 2.5 mg/minute until HR < 100 or you get to 50 mg.10 Provide a 500 cc boluses of IV normal saline, and give additions boluses as needed to further support blood pressure. Consider a norepinephrine infusion if one can be established quickly (a MAP>60 is a reasonable titration goal). If starting the infusion leads to a delay, push-dose phenylephrine is a good option. This patient has proven themselves to be in cardiogenic shock due to rapid AF which is refractory to electric cardioversion. The teaching to avoid CCBs no longer applies after failed attempts with cardioversion (furthermore, blood pressure is being supported actively with fluids and vasopressors). If this strategy is successful at sufficiently lowering the heart rate to 100-130 bpm, convert to the conventional diltiazem drip at 5-15mg/hr.11,12

If these measures are still not working, consider adding magnesium (2-4 grams IV over 10-15 minutes), calcium (1 or 2 grams of calcium gluconate), or starting a digoxin load in addition to diltiazem.

One thought on “Palpitations in the ED: Treatment Strategies for Rapid Atrial Fibrillation.”

We had a blast at our 🦈 Shark Tank 🦈 session with Dr. Jim Feldman this morning at conference! Each PGY class came up with a pitch to help reduce the number of missed orthopedic injuries in the ED. And the winners were…
Extra thankful for our family today 🦃❤️
Welcome to Boston Medical Center!
🌈 Attention attention! 🌈